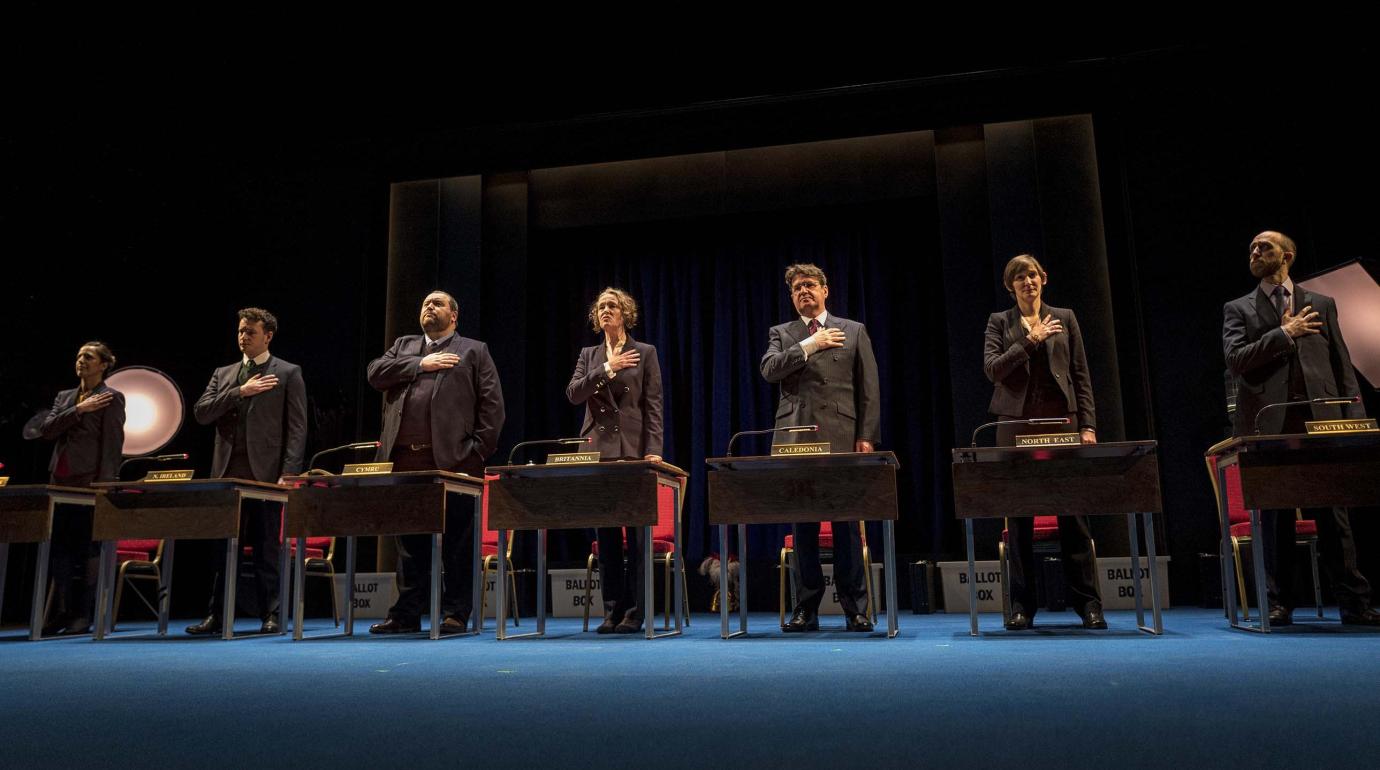 My Country: a work in progress

I went into My Country: a work in progress with two assumptions. Number one, that I would either love it or hate it. Number two, that it was the play itself which was the work in progress, not out country.

The opening is kind of trite, a little gimmicky (I want to give it the benefit of the doubt but this doesn’t bode well) – “Britannia” or “Britney” as she is (mis)named, comes on stage with the house lights still on from a door in the back of the theatre. A woman behind me says to her husband “Oh shush, it’s started already, pay attention”. The audience are lulled into silence and Carol Ann Duffy’s words begin to be spoken. And they are unmistakeably Carol Ann Duffy – I’m thrown back to my GCSE English class where we told that she is the Poet Laurette and so she is the Best Poet.

With the lights up on the audience it’s clear that this audience is very specific – the average is probably sixty and a large majority are white. Maybe this is Warwick, maybe it’s the show. (I think it’s probably the show)

The rest of the ensemble begin to enter with their various ‘theme tunes’ changed with a remote pointed at the lighting box. As they enter I notice that they are mostly all white, except for one Asian woman. I did already know this would be the case as I read Charlotte Maxwell’s fantastic review. She addresses this issue far better than I ever will.

The lights finally go down and the audience get a real idea of the set which was very basic. School desks which remind of History Boys and Matilda are pushed into the centre. The pushing of the desks is also basic, and looks unrehearsed. There was very little done with the set (at the end the upstage screen lights up orange and the actors wander about behind it), so the words and performances should have been able to carry it. It might have been better to see it in a small black box studio, where the half empty theatre I was sat in would have felt cramped, in a good way. The moving of the desks prefaced the rest of the movement, which lagged behind the fast moving verbatim script. Polly Bennet (People, Places & Things, Pomona, nut) is cited as the movement director and yet I saw none of her undeniable talent translated on stage.

The verbatim script was good and did what it said on the tin, but it didn’t make me feel much. I was kind of just told what I already knew. That this country is a weird mishmash of racist assholes and conservatism and tradition. The comment that was made on the verbatim, whatever it was, came across as clunky and overworked. It was trying to be objective and yet I don’t think a leave voter would have felt it was a show made for them. (Should we be making shows for them? Would they even come and see them?)

The atmosphere was strange. One audience member loudly says “Boris” when Penny Layden did her (arguably wonderful, arguably overdone) impression of Johnson. An audience member also laughed loudly at a white man speaking as a Saudi Arabian. Three people gave a standing ovation, and some jeered (cheered? not sure)

It wasn’t all bad, okay, I liked the singing. I liked the songs. Not the recordings – the live singing of the songs. The rousing chorus made me feel more than the poetry did. The Irish dancing was also good, although I could sense not particularly skilled.

Ultimately, it was meh. Kind of considered not posting this review, but I think I need to stop writing reviews and then never posting them. (Maybe?) I didn’t love it, but I didn’t hate it. It was just a bit boring. And it could DEFINITELY have been a work in progress show (I would have given some good and worthy feedback). Standing outside the theatre, the two (probably) oldest members of the audience walked out, saying “Well that was disappointing” and I really couldn’t have agreed more which seems ironic in the context of Brexit. The show was just an edited collection of lowlights (and occasional highlights) of the British public.

FOOTNOTE: They talked about Donald Trump in a Brexit play. I mean. Really.